While the World Series of Poker Main Event wrapped up last week, another annual tradition is still in full bloom.  The tradition I’m referring to is the argument between poker players of why watching the Main Event on ESPN just isn’t the same anymore.

From what I can gather, the poker community has come to two conclusions:

2) The commentary is awful.  Lon and Norm offer little to viewers who need competent poker analysis to help viewers understand how complex this game is.

As this debate raged on poker twitter, a longtime friend of the site, Christopher George posted the following which nailed it on the head:

While I understand that nobody enjoys watching people tank on tv, we are all just as annoyed with people tanking at a non televised table.  Therefore, the fact that it is being televised is not the issue.  The issue is tanking.  Furthermore, there is no guarantee that a faster moving game would be more entertaining without additional improvements in production.

Is it the commentary?

While I’ve grown tired of Norm’s ex-wife jokes, it sounds like a good portion of poker twitter is looking for training videos instead of entertainment. Those people are ignoring that ESPN is not obliged to teach you what the proper 3 bet range is from middle position.  Their one and only purpose is to create entertaining television that everyday people will want to watch.  Also, there is a ton of great material out there on multiple poker training sites (including the one Cee Gee is involved in [Run it Once]).

So what is the solution?  I think it is pretty easy:

ESPN should focus on well edited one hour episodes.
Shoot as much of the Main Event as you can and then create a cohesive story that leads to an exciting conclusion.  Air it after the WSOP ends during the end of summer before people start going nuts for football and the MLB Playoffs.  In early episodes you can focus on the stars of the game but then start to develop new stars as the field starts to drop.  If you focus your editing on maybe thirty people who end up finishing in the top 100, you won’t give away the ending and have just enough joy (for the people who make the final table) and despair (from those who get very close but not close enough). If you know who is going to be involved in biggest moments of the tournament, you can tell their story leading up to that moment and make people care about whether or not they bust out.
From what little of the Main Event I watched this year I noticed that they were tracking two tables at a time during the first few days.  While each of these tables had professionals that I knew (including Brandon Shack Harris, as written about in We Are Lucky to Have You and Thank You Very Much) I can’t imagine any casual viewer caring about him or any of the others with the way they were presented.   Furthermore, I can’t think of one player at those early feature tables who made it very deep in the tournament.  It was a complete waste of time to introduce characters who died off without even a whimper or balloon.
I believe that if you build an edited series with the foreknowledge of who will end up getting to the final table it will not be hard to frame the tournament as exciting and dramatic.  It shouldn’t be hard to find charisma in the players who will actually end up doing well in the tournament, as almost every winning player is going to be happy.  Hell, if you end up having to deal with one of those robot types who shows no emotion, you can create a storyline out of that.  The guy keeps flopping two pair while looking like he’s watching his pet die is very easy to turn into a villain.
The last thing I want to point out is that by far the biggest difference between the coverage of the early/mid 2000’s and recent years is what we see after the tournament is over.  I remember being bombarded with re-runs of the Main Event on ESPN during the winter of 2003 and 2004.  There is a reason that the non-poker playing public still holds a few memories of Chris Moneymaker, Greg Raymer and company – they were on tv constantly!  Compare that to the Final Table of the 2019 Main Event.  It went for hours and will never be replayed.  Think of all the women who will be deprived of Dario Sammartino’s beauty!
The best part of this solution is that it does not mean that you cannot utilize PokerGo to run a delayed live stream daily.  Give the poker players what they want with Ali & Nick doing commentary.  If we’re paying $10 a month, it’s the least they can do since they aren’t covering any other events at the time.  In this scenario, poker players get a full stream with detailed analysis while also creating an opportunity to grow interest in our game before it gets buried forever in the television cemetery.
0 Comments
General Poker Thoughts

Last week I had the ultimate “how did we get here?” moment while watching coverage of the first day of the WSOP Main Event on ESPN.

Like most people my age, my journey into poker started in the early 2000’s during the post-Moneymaker hysteria.  Because of that, all of my earliest and fondest memories of the game involve ESPN’s coverage.  The slide guitar, the  vignettes of up and coming players, the awful ex wife jokes, the whole deal.

This all coincided with my poker evolution, moving from curiosity to fascination and then obsession.

Thankfully, this awakening coincided with me befriending a group of guys who had also become interested in the game.  Because of them I have great memories of our early struggles with the game.  What started as a few random NL tournaments quickly turned into a weekly game every Tuesday night.

While I have a strong memory of those early days, I have the assistance of an old website forum that documented the antics of that game.  Populated by the regulars in the game, we spent years going over hands and absurdity from each evening we played.

All of this is relevant because one of the eventual regulars from that game, Brandon Shack Harris, was seated at a featured table on ESPN this evening.

Seeing BSH on my television is nothing new, as I had sweat him via the web based WSOP coverage during his many deep runs.  However, this was different. There was something notable and official about one of us being on the Main Event coverage, the same television show that introduced us to the holy game of poker.

Ladies and gentlemen, we have entered a new era.   These are the times we will all remember. 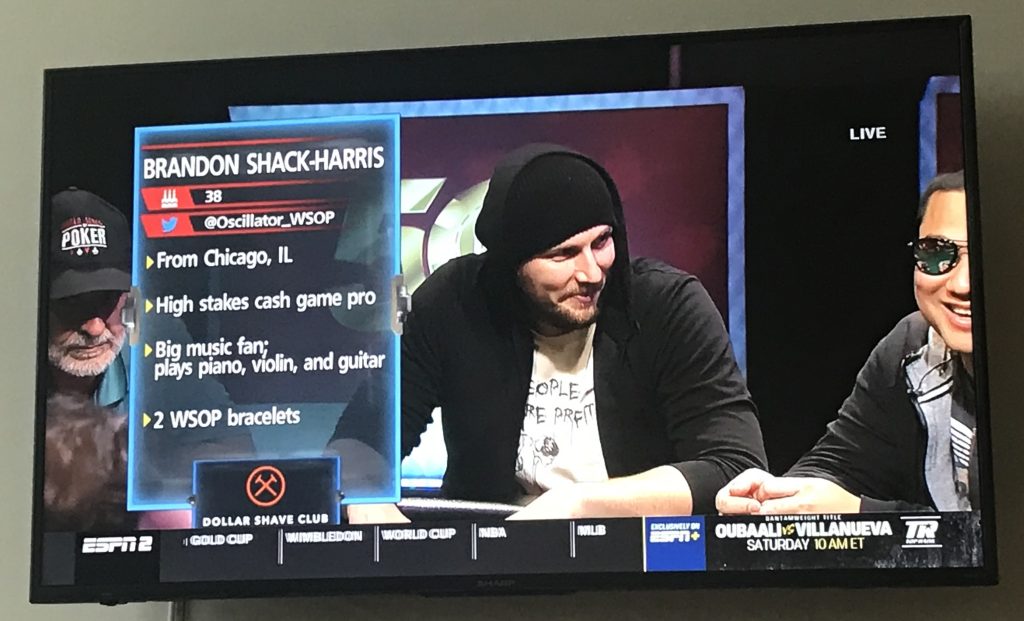 After a few years off, it is time to get the band back together.

The original Nitty Kitty website featured a blog that focused on the achievements of my friends
in the poker community. Now that I’ve decided to rehash this old website it is certainly time to pick back up the Blog.

With that in mind, this will once again be a one stop shop for information on our poker apparel & documentation of our poker world.